In the beginning of March I attended a super rad photography workshop in Santa Barbara called  Yeah Field Trip . It is a 5 day event with 500 photographer attendees geared to inspire business growth, photographic artisty and friendships!  I arrived at the camp knowing no one and quietly walked to the back of an impossibly long line for dinner.  I swear that going to events alone as an adult is a far scarier thing than the first day of highschool or college. I kept thinking, ‘I wish that Anthony was here with me.’ Luck would have it that I stood in line behind the most adorable couple so I decided to strike up a conversation and BAM a friendship was born.

Amy and David are a photographer duo in Seattle. Amy is the lead at Amy Galbraith Photography and David is her partner in crime, together they create jaw dropping images. They have been together for 7 years, first meeting in college and then moving together to Jackson Hole to live and work as ski bums! They were engaged late 2014 and are planning their wedding in Washington for this September. Their wedding will be photographed by amazingly talented local Seattle photographer, Lucas Mobley. (Lucas is another friend that I made while at Yeah Field Trip!)

Amy and David were a couple that I instantly was drawn to and connected with, their story was similar to my story. I met Anthony in Mammoth mountain; snowboarding. He was living and working for Mammoth and we fell in love in the midst of falling snow and fresh mountain air! I am a full time photographer and Anthony is my second shooter. It’s like Anthony and I are the California version of Seattle couple Amy & David! (not to mention that Anthony looks oddly similar to David and they have many personality similarities)

Amy & David took their original engagement photos on a Glaciar in Washington and were pumped at the idea of a second set of engagement photos. And so we climbed a Santa Barbara hilltop basking in warm California light and the couple got cozy amongst a sea of wildflowers while I captured some amazing images.

It was a chance meeting–the right place at the right time. I made a friendship that I hope will last for years to come! Anthony and I have made plans to visit Amy and David this year, and hopefully the 4 of us can hit the slopes together next winter! Cheers to stepping out of your comfort zone and making new friends. You never know what can happen! Ostara Photography
Thanks so much Benj!!! SO glad I was able to meet you at Field Trip!! You're rad!! Good times had by all!! :)
Reply 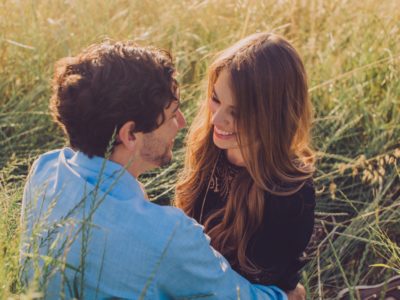